Customs terms every crossborder eCommerce seller in SEA should know

Customs terms every eCommerce seller in Southeast Asia should know 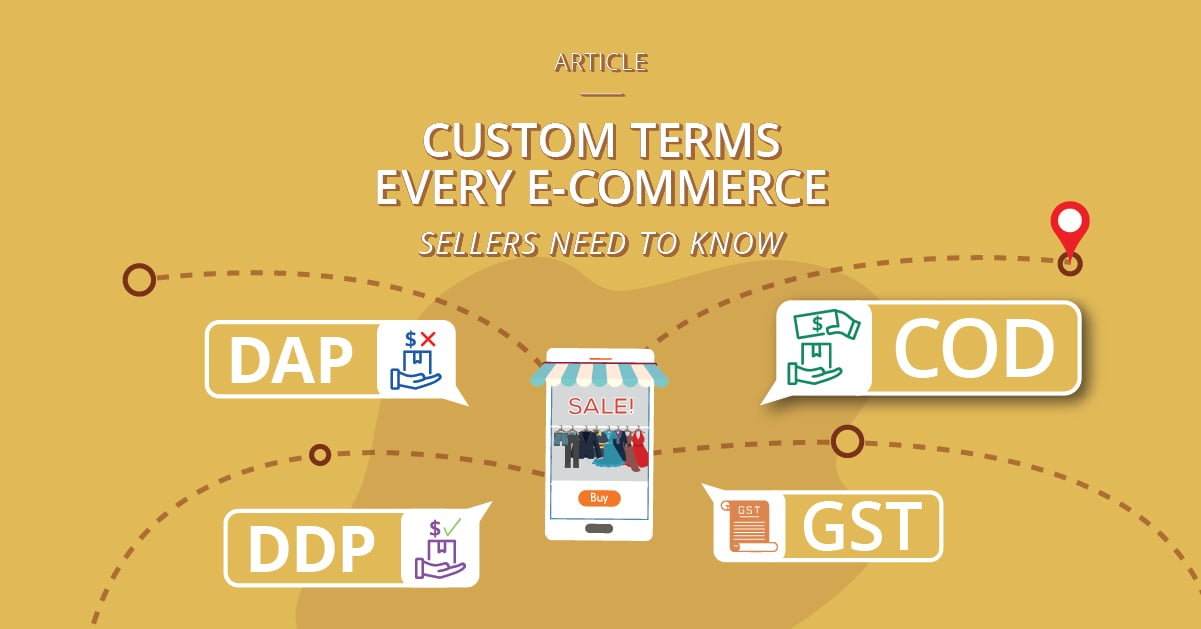 Things are looking up for eCommerce in South East Asia. The industry's growth has jumped sevenfold from US$5.5 billion in gross merchandise value (GMV) in 2015 to over US$38 billion in 2019, according to the latest e-Conomy SEA report by Google, Temasek, and Bain & Company.

All of this is proof of the exciting opportunities awaiting online merchants and eCommerce brands looking to expand their cross-border operations in Southeast Asia. This, however, is easier said than done, especially when you consider the challenges of dealing with regional eCommerce logistics and customs. After all, Southeast Asia is made up of 11 countries, each with its own set of customs regulations, tariffs, import duties, and paperwork that all merchants have to deal with.

So we thought of going back to the basics. We’ve put together a glossary of commonly used customs terms in Southeast Asia, complete with definitions specific to the country that uses them.

Cash-on-delivery is a service that enables consumers to pay for their eCommerce purchases in cash, and only upon delivery of their order.

Cross-border sellers are encouraged to offer COD as an eCommerce shipping option in Southeast Asia due to low credit and debit card penetration rates. For example, the percentage of debit and credit cards issued in Indonesia relative to the population is only 15%, according to research by payments platform Adyen.

A customs declaration is a document (usually a form) that enumerates the details of the item (particularly its shipment value) being imported into a country’s customs checkpoint. All countries in Southeast Asia require shippers and importers to complete a customs declaration form.

In the context of customs clearance, de minimis value means that governments will not impose import duties on items whose value falls below a certain threshold. Any taxes on these small shipments are not worth the administrative effort of collecting import duties.

Delivered Duty Paid (DDP) refers to transactions wherein the international online merchant assumes all responsibilities for cross-border shipping. These tasks include arranging for goods transport from your assortment all the way to customers’ doorsteps, as well as the payment of VAT and other duties before shipping.

For DDP, customers remain worry-free as the seller shoulders everything associated with the shipment. This burden also involves risks such as clearance delays, storage requirements, and the costs to replace damaged goods.

Since all fees have already been paid by the seller, goods sold under DDP can be released for fulfilment and last-mile delivery immediately after clearing customs. (Read our previous blog post on the dos and don'ts of customs clearance to learn how to get your parcels moving as quickly as possible.)

On the other hand, Delivered Duty Unpaid (DDU) means that import duties and taxes are not paid before goods arrive at their destination country. Items shipped with DDU must first be subjected to customs duties and taxes before being released by local customs authorities.

Either the seller or customer will end up paying for these duties and taxes. If it’s the latter, it’s imperative that buyers are notified of this before they make a purchase.

While the 2020 edition of Incoterms (the definitive guide on the world’s essential terms of trade for the sale of goods) has replaced DDU with Delivered At Place (DAP), the former is still a widely used term in international trade.

Goods shipped to Southeast Asia will be charged different import duties and taxes, depending on the destination country, item value, and type of goods being sent. While each country in the region has varying types of taxes and duties, most of them share these common taxes:

Taxes on goods and services

Southeast Asian governments impose taxes on the goods and services entering their jurisdiction, with varying names, fees, and coverage areas. Keep in mind that these often change along with the eCommerce and logistics landscapes, so keep close tabs on regional cross-border shipping guidelines and thresholds.

For example, in Singapore, Goods and Services Tax (GST)-registered businesses that sell imported goods online must pay GST when these items are brought into the country. In other countries like the Philippines, GST is known as Value-Added Tax or VAT.

Three countries in Southeast Asia (Brunei, Malaysia, and Myanmar) do not implement GST/VAT. Instead, the Sales and Service Tax (SST) is Malaysia’s counterpart, imposing a 5%-10% sales tax on goods, and 6% service tax on companies with annual revenues above RM500,000.

Currently, parcels valued above RM500 require the payment of SST. As of September 2018, the Malaysian government is looking at eCommerce and online businesses to “see if they qualify for [SST] exemption.”

This tax applies to merchants that are registered in the country they are importing goods to.

Import duties are taxes collected on imports by a country’s customs agency. Customs duties are typically a percentage of the item’s value and is also based on the product’s classification, as indicated by its HS code (more on this below).

As mentioned earlier, goods that fall under the country’s de minimis value rules are exempt from import taxes.

A harmonised code, also known as a harmonised system (HS) code, commodity code, or tariff number, is an internationally agreed special code assigned to types of commodities, ensuring that goods are identified under a common protocol.

Landed cost is the cost of imported goods upon “landing” at a country’s port or point of entry. It includes the cost of freight and delivery insurance, as well as port and dock charges.

Although technically not related to customs, last-mile delivery is an important component of cross-border shipping as it is the only stage of the logistics process that directly involves the customer. This refers to the final stage of shipping an item, usually from a warehouse or processing centre to the buyer’s address, hence the term ‘last mile.’

This refers to the value of the shipped item that is disclosed by the shipper to customs, which then uses it as the basis for computation of customs duties and taxes.

These are just the most common customs terms that cross-border sellers should get acquainted with when selling in Southeast Asia. When in doubt, be sure to check each country’s customs and importation rules.

While customs and other back-end processes can seem like a nightmare to sort through, the good news is that merchants can engage with eCommerce logistics providers specialising in the region. Look for a partner who can walk you through each country’s customs regulations, and take care of things such as customs declaration and even last-mile delivery.

Interested in making J&T Express your eCommerce logistics and customs clearance partner?Fill up the following form to get started.